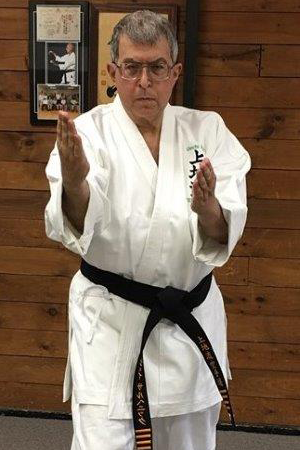 Jay Salhanick holds the rank of 9th degree black belt and has been a student of the Okinawan karate system known as Uechi-Ryu, along with other forms of martial arts, since 1969. Sensei Salhanick started his karate training at the age of 13 and attended the children's classes at the "Mattson Academy of Karate" located in Boston MA. His instructor (Sensei), in those children's classes, is the same sensei he has to this day – Robert J. Campbell – 9th degree black belt, and Chairman of the Uechi Ryu International Karate Association. Salhanick has had the honor and privilege of training under world renowned Master Instructor Robert J. Campbell, in addition to attending the Mattson Academy of Karate of Boston.

Sensei Salhanick, while he was in the pursuit of knowledge and experience, also had the honor of cross training with many great master instructors from a variety of other martial art systems. He attended classes and seminars taught by such internationally known and respected master instructors such as: Bill Wallace, Joe Lewis, George Dillman, Billy Blanks, Ed Parker, Chuck Norris, Nick Cerio, Steven Hayes, Kang Rhee, Bill Hayes, Joe Campesi, Lou Lazott, and many
more.

In 1979, Salhanick went into the United States Marine Corps (1979 – 88). While in the Marines, Salhanick requested many times to be stationed on Okinawa so he could further his karate training at the head dojo operated by Master Kanei Uechi himself. However, in the Marine Corps' infinite wisdom, his request was always denied. However, he made the very best of being stationed in other areas of the United States. While he was stationed in Virginia Beach, Virginia, at night Sensei Salhanick attended fighting seminars at the Chuck Norris Karate School located in Virginia Beach. Then while stationed in North Carolina, he attended classes with Master Bill Hayes. Note: Master Bill Hayes is the creator of the "Marine Corp Martial Art program". Then in the 1980s one of the greatest tournament point fighters of all time moved to Massachusetts, world champion Billy Blanks (Tae Bo). Once Salhanick returned home from the Marine Corp, he realized the opportunity he had at that time. He had one of the great tournament point fighters of all time in his own back yard. So he went and joined Billy Blanks' dojo and attended Billy Blanks' sparring classes on a regular basics.

Sensei Salhanick and his close friend and fellow Uechi Sensei, Joe Pepicelli (Tactical and SWAT Police Officer) decided to become partners and together opened a dojo in 1985. It was named "The Boston Karate Academy" and it was located in the North End section of Boston. After a while the dojo was in full operation, Sensei Pepicelli took over full operation of the Boston dojo. Sensei Salhanick then opened another dojo in Medford MA. The name of the new dojo was the "Traditional Uechi-Ryu Karate Institute". The dojo was in Medford a few years and then moved to a new location in Boston. A short time later, Sensei Salhanick took over the karate program at the University of Massachusetts – Boston, which Salhanick taught for 10 years. After a while, Sensei Salhanick, and his wife Anita, decided to get into promoting of martial art tournaments. They started producing a major karate tournament, and named it the “New England Regional Karate Championships." This was a rated tournament by all the major martial art rating services of the time. Such as NASKA, KRANE, PKL, and the NBL. They ran this event for several years, until Sensei Salhanick decided to retire from the tournament scene.

Notes: Sensei Salhanick can be found in: