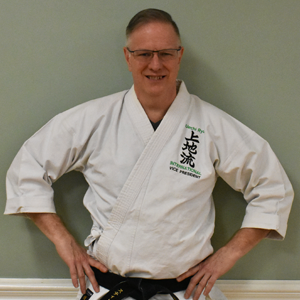 Steve Diorio holds the rank of 8th Degree Black belt and has been studying Martial Arts since 1976. Steve started at the Marion Gerrish Community Center in Derry New Hampshire where Sensei Bruce Cummings was teaching Kaijustukai Aikido. He also trained and studied under the following teachers:

Dr. Kay-Chi Leung at the American Jiann Shyong Kung Fu Center in Chinatown while in High school. Years later he would take up the study Kung Fu, Wah Lum under Sifu Noah Mandel. 1978 Steve was awarded the Rank of Shodan in Kaijustukai Aikido and immediately began teaching the art. 1980 hungry to learn more. Steve began the study of Shotokan Karate with Sensei Kazumi Tabata at the Umass Boston Campus. 1986 Steve resumed the study of Shotokan Karate with Sensei Charles Curry at the St. Paul AME Church in Cambridge MA. Note - The St. Paul Dojo was founded by astronaut Dr. Ron McNair who died on the Space Shuttle Challenger; 1988- to Present: Steve Began his study of the Uechi Ryu Karate system with Sensei Jay Salhanick. Steve loved Uechi as soon as he started training in it. He has had the honor of attending classes and seminars taught by some of the best Uechi and Martial Arts instructors in the world. Uechi teachers such as; Master(s): George Mattson, Bob Campbell, Buzz Durkin, Bob Bethoney, Allan Azoff.

Ever since Steve as introduced to Uechi Ryu in 1988, Steve has focused on Uechi Ryu but he still actively attends seminars and practicing a variety of Martial skills. To complement his Uechi Training and to offer more knowledge to his students. Steve currently teaches a large and active Kid’s Karate program in addition to Adults. He has also taught the Martial Art program for the Westwood MA, recreational Program for kids for 26 years. During that time, Steve produced and graduated a number of Junior Black Belts through this special program.

A number of Steve’s students from this program went to college and formed their own Uechi Ryu Karate clubs. At schools such as - Umass Dartmouth, Boston College and Mass Maritime Academy Steve was also an advisor to the Brandeis Uechi Ryu Karate club for 18 years as well as taught a series of self-defense seminars for Midshipmen at the Mass Maritime Academy.